Artist of the Month-Franz Kline 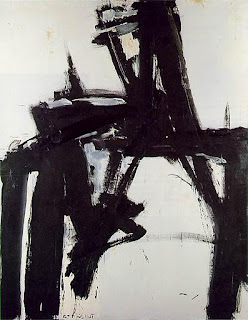 In my continuing Artist of the Month series I routinely try to explore artists outside of the Fantasy genre that have influenced my work or inspire my work tangentially through their unorthodox process. This month I expand upon this idea by including one of my favorite artists Franz Kline (1910-1962).

As a fantasy artist it would seem that there is very little connection between the high modern Abstract Expressionist and myself, but he is one of the few painters who's work I keep hanging on my wall in my studio. Kline is the ultimate composer. When ever I begin a work in the thumbnail stage I, (and every artist) should look to Kline. Eliminating narrative, eliminating color, eliminating space, Kline works in pure abstract composition. Influenced by Asian character brush painting Kline takes the pure form of the thumbnail sketch and elevates it to high art. The essence of the creative process. 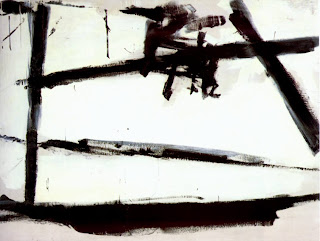 There is not much to say about his work.  It is what it is.  Pure and clean and sublime. There is no context or narrative, simply the essence of painting. I have always admired his compositions and he is the master of the thumbnail. So the next time you are struggling in your sketchbook over a dozen preliminaries, look to Kline and draw inspiration from the master who spent his life executing thousands of paintings dedicated to this simple and limitless exercise. Posted by William O'Connor at 3:20 PM No comments:

Email ThisBlogThis!Share to TwitterShare to FacebookShare to Pinterest
Labels: Artist of the Month, Kline 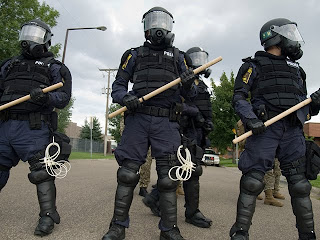 I had a professor once that told me that there was a difference between clothes and costumes. Costumes are what people wear when pretending to be someone they're not, while clothes are the items we wear every day.

In fantasy character design I am constantly trying to balance the practical with the fantastical. As in any other type of design form needs to follow function. When designing the garments and gear of a character in a fantasy game that will be in combat situatons and traveling to different environments and locations, I always like to refer to actual soldier gear. The past 150 years has allowed us to take candid photo reference of what soldiers actually wear into battle. Although the technology has changed over the past several thousand years, the soldier's gear has altered little. 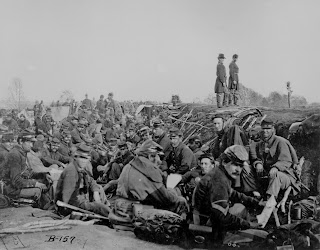 In this photograph (ca. 1863) we see soldiers preparing for rail transport to the front. Whats noticeable is how little they carry. A small ruck sack, ammunition case and rifle. This was a direct example of form following function. 19th C. soldiers never traveled far from their supply lines and a regiment would be accompanied by camp followers and even family that would cook and make camp. 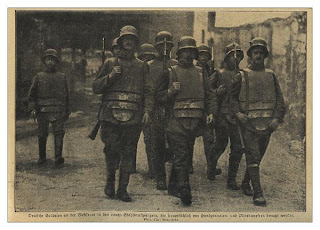 In this WWI photo taken fifty years later we see how soldier's gear has evolved. Notice that there are no backpacks. Trench warfare had ground movement to almost zero. A soldier's primary concern was protection against machine guns. These German soldiers have sacrificed all their weight allowance to armor. The high leather boots and leggings were to protect them from standing and sleeping in the mud for weeks. 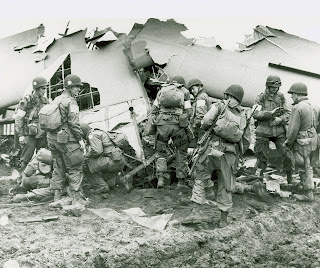 In WWII, only thirty years later, the style and technology of warfare has evolved again. Warfare and combat become extremely mobile. A soldier must carry everything he needs to last for an entire mission inside enemy territory. If you can't carry it, you don't have it. Its this form following function that we see almost all armor (except the helmet) abandoned in favor of mobility and all weight allowances are surrendered to ammo pouches and gear. The entire body becomes a backpack. 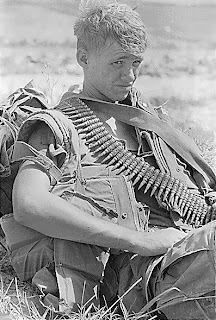 In Vietnam the rule of form following function changes again. Mobility is of crucial importance, but soldiers were closer to supply lines with the use of helicopters and fire support bases. Supplies could be sacrificed to more important needs, like armor and ammo. 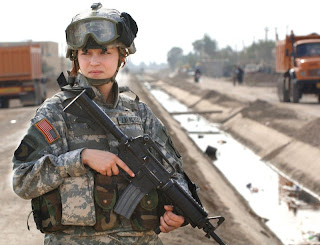 Today the contemporary soldier is no different that anytime in the past 5000 years. In the middle east we see new armor styles evolving. Armored vests, elbow and knee pads, as well as eye protection are essential for urban close-quarter-combat. Shattering glass and broken concrete have replaced shrapnel as threats. With no need for long marches backpacks have been replaced by water pouches. The soldier's gear is tightly packed around the torso in order to maintain balance in the rough terrain. and to move in tight quarters easily. With close supplies and support their are almost no personal supplies carried on patrol. The new warfare has also introduced female soldiers into the equation. So what does female armor look like? Its exactly the same as male armor. The US Army frowns upon kevlar bikinis.


So although as a fantasy artist I am not trying to replicate historically accurate armor I hope this shows is that we can all draw a great deal of reference from actual soldiers and combatants. The fact is that a soldier will only wear what she absolutely needs. If it does not serve a function its abandoned, and its appearance is of no concern to them. This gear is what keeps them alive. When designing characters of my own, I continually try to remember, what would this person wear to keep them alive today? I try to design clothes and not costumes.

WOC
Posted by William O'Connor at 6:44 AM No comments: