War of the Dragonborn 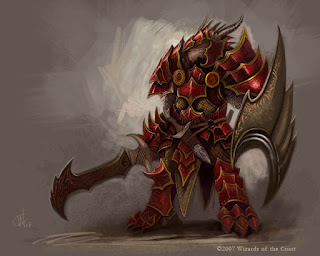 On May 21st the publisher of the videogame Skyrim filed a trademark request for the word "Dragonborn".

In 2007 I was called out to the Wizards of the Coast D&D offices in Renton Washington to help concept this race and so I feel a particular fondness for the scaly brutes, kind of like a godfather. I remember struggling with the design because it could not have any draconic features (horns, wings, tails, long necks, etc.) and it was looking too much like reptile men.  I finally pulled from more of a cultural context than a visual one.  I thought of a cross between Klingons and the Gorillas from Planet of the Apes, but Dragon-Men!, and the rest drew itself.  I've always liked them, (except for the Boobs.  You try having heated debate  in an office board room on why Dragons don't have breasts, and you realize how surreal this job is.)Also, I conceived that this race would be steeped in ancient tradition and tribal custom.  For that I drew upon an Asian aesthetic to their costuming.  Overlapping scales and plates, with no use of buckles would make them look different and older than the other races.

Both companies have a rightful claim to trademark anything they want.  WotC was there first, but it doesn't possess a trademark, and its likely that Skyrim's trademark will not effect D&D.  If Skyrim's trademark effects D&D then this race will go extinct in 5th Edition. To whoever wins the War of the Dragonborn I wanted to share a few images from their inception during the early development of 4th Edition.  My little dragon babies, they grow up so fast!

If you have any questions about the concepting of this race, please leave a comment. 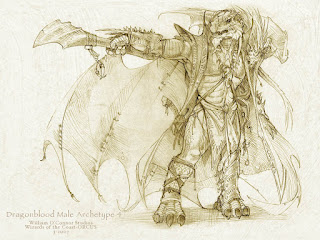 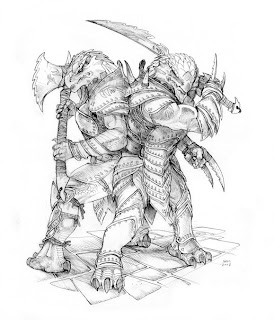 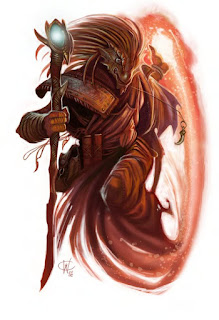 Posted by William O'Connor at 6:55 PM