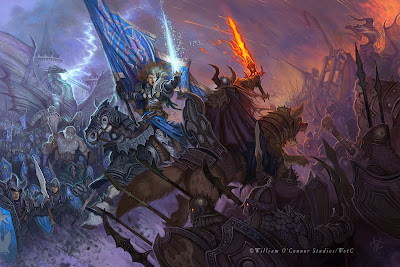 
The most challenging compositions are when you either have to go extremely big or extremely small. In the instance of this painting I had to go very Big!! Juggling a two page long art description with dozens of image files of reference, leaving room for graphics and bleed is like running an artistic marathon...exhausting but very rewarding when finished.

"The Conquest of Nerath" (2010) was illustrated for Keven Smith at Wizards of the Coast for a D&D board game, of the same name, slated to be released in June 2011, and has been included in the Dungeons and Dragons 2011 Calendar . 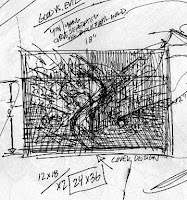 A lot of students and young artists always ask when they see a complex work like this "Where do you start?" The answer is the same for every painting, at the thumbnail-design stage. Develop a simple design motif. In this example, the aspect of the art description that struck home for me was "Good vs. Evil". That was the heart of the image. As you can see by the attached thumbnail I quickly developed a concept based loosely upon a yin-yang symbol. This motif was reinforced by the idea that as a board game (similar to a chess game) the color coded game pieces of both sides should be given equal prominence. In this instance the description detailed Silver&Blue vs. Black&Red. 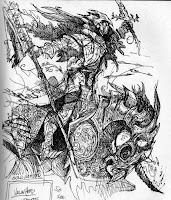 Once I have a design established I can start developing details like costumes. This is the part of the process I love the most and I think is the most creative. I often spend several days doodling in my sketchbook developing costume designs. As you can see by the attached sketch, the central figure was originally an elf on a unicorn, which got altered by the designers to a human on a warhorse.

The rest of the painting follows the stages that I have demonstrated in earlier blogs. The real work for this image was the hours and hours of rendering detail. There's no magic trick-just lots of time! 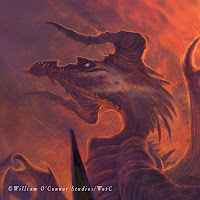 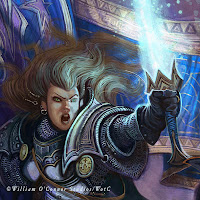 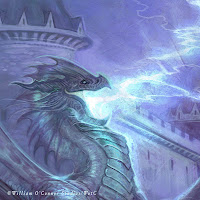 I loved you not. 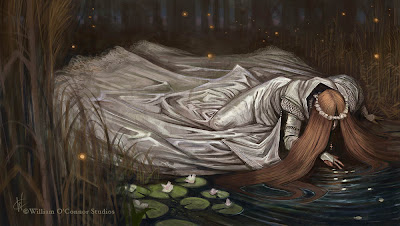 A study, inspired by the line of Hamlet to Ophelia that sends her over the edge, literally.
I wanted to sketch and play with the contrast of satin white and rough dark green grasses.