The Art of The New

I had the privilege of briefly perusing the new exhibition at the Museum of the Art Institute of Chicago over Easter Weekend. This survey of French art during the Gothic and Early Renaissance was comprehensive displaying tapestries, sculpture, costume, architectural plans and paintings. Being a painter it was the these works that struck me the most. Reproductions do not do them justice, the detail and color after 600 years is breathtaking.

My primary fascination however is the fact that these were the first oil paintings. The workshops of the Gothic painters had to experiment with new pigments and mediums that had only recently been brought to Europe after the Crusades from the Middle East. They were making this up as they went along! Looking closely you can see artists experiment with medieval tempera techniques and then explore to use glazes and mottling and blending to create lustrous effects only possible in oil. There were no classes to take, it required a hundred years of trial and error to refine the techniques. These paintings must have been astounding new revelations at the time that challenged a thousand years of medieval training. Just as the camera effected painting in the 20th Century and the Computer in the 21st, I try to remember that in the 15th century, oil painting was a brand new and revolutionary medium, and the one thing about art that never changes, is that artists will always embrace The New.

WOC
Posted by William O'Connor at 12:51 PM No comments: 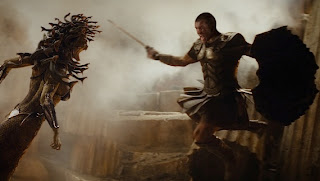 Anyone who has lived within 100 miles of pop culture in the last twenty years has undoubtedly noticed the prodigious number of action heroes leaping to the rescue. Whether it is in the movies, video games or in illustration the most common aesthetic in art these days is what I call The Heroic Leap.

I think I began to notice the trend about ten years ago with The Matrix. Since then, the "Bullet Time", Slo-Mo, Heroic Leap has gone completely mainstream. In one 30 second movie trailer I watched recently, there were three heroic leaps! That's one every ten seconds! In the past several years the Heroic Leap has become so ubiquitous its hard to open a book or game without seeing it! As an artist working in the fantasy genre it is now a motif I use all the time, and is requested in most art orders.

So I wanted to know, where the Heroic Leap started. And I don't mean with Frazetta or Spiderman, but really far back, when did artists begin depicting heroes as leaping? 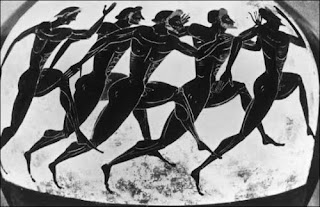 Since the beginning of time extraordinary human feats have fascinated us in the form of Dance and Acrobatics. In classical mythology flight has always been reserved for the gods. Nike, Apollo and others were supernatural and thus capable of flight, usually facilitated by the use of wings. But I'm not talking about flying I'm talking about leaping. Gods fly and heroes leap. There is an important distinction. The leap is the hero's brief ability to defy gravity like the gods, but then return to earth safely. The most famous example of course being Icarus, who attempts to fly like the gods, but is quickly put back down again.

Ancient athletes were often depicted as god-like in their abilities using multiple poses to translate the stages of motion. This primitive technique was hundreds of years ahead of its time.

After the Renaissance the depiction of leaping in the visual arts art was limited. For centuries artists working in their studios with static models made leaping figures appear either like swimming or floating. The innumerable renderings of The Ascension of Christ repeatedly looks like Jesus standing in the sky.

For artists the great leap forward (pun intended) was in the late nineteenth century and the invention of the camera. For the very first time artists were able to see the invisible world that had eluded them for centuries and it wasn't like anything they had imagined. Motion blurs, lens flares, time lapse, depth of field, multiple exposures, and very importantly, high speed photography revealed motion in a new way. As one reviewer at the 1893 Chicago World's Fair wrote about the Muybridge Locomotion Photographs "...they reveal that everything we had previously understood about motion to be false." By the early twentieth Century artists in all the fields were adopting the revelations of the camera into their work. 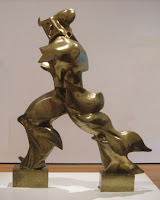 The Modernist Movement embraced technology and new concepts. Futurism actually celebrated this new fast-paced world with works like Matisse's "Dance (1909), Duchamp's "Nude Descending a Staircase" (1912), Boccioni's sculpture "Unique Forms in Continuity of Space" (1913) By the end of the first half of the 20th Century the aesthetic of capturing movement in a single image had soaked into the artistic consciousness and was commonplace. By the 1940's Superman was leaping tall buildings in the comics and Flash Gordon was rocketing around film screens. 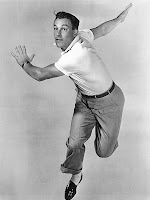 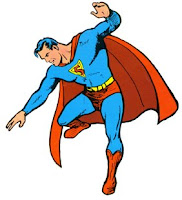 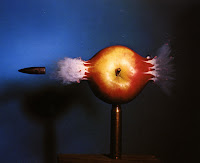 In the 1990's the advent of CGI and video games made swinging across a chasm in the Death Star look boring. New advances in 3D digital photography revealed motion in ways never seen before and changed visual perception again.
Today our heroes jump more than ever. Defying gravity in 360 degrees, killing aliens, and leaping off high buildings. Just as the camera redefined our understanding of motion so too has the computer. As long as there are stories to tell, and as long as heroes populate those stores, they will be leaping through our imaginations for years to come. 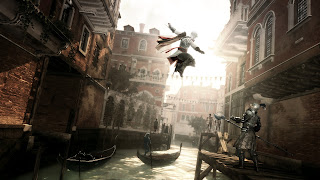 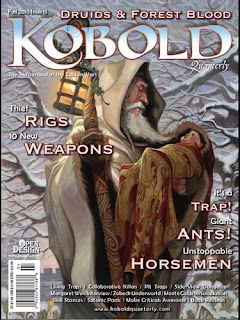 The life of a painting is an interesting one. In 2004 I did an oil painting entitled "Merlin and Arthur". It was an exercise in my favorite palette, the white-on-white. I took it to a few shows, I think it may have achieved a few accolades from colleagues and clients, but that was all and it quietly was retired to the attic where is has hibernated for six years.
Recently this little painting has woken up. The original was sold to a collector, the usage rights were purchased for a magazine cover (Kobold Quarterly Fall 2010), and it will also be included in an upcoming book of art in 2011, all in the past few months.
You never know when those old paintings will need to be dusted off for a second life.

The Legend of the Golden Dragon 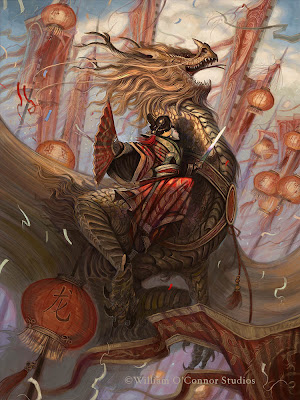 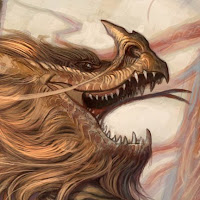 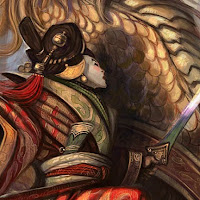 The Legend of the Golden Dragon

A new Cover for a project coming out soon by the same name. Thought I would share some of the images and the process work. This was a great deal of fun because I got to play with Asian/Chinese design which I have always loved since my early work on Legend of the Five Rings. 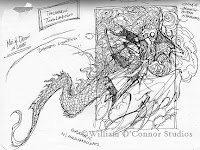 Working in a sketchbook on thumbnail designs for the project is always the first step. The narrative was one that entailed great joy and celebration in victory. I wanted to denote this by a grand upward sweep in the composition. Confetti and balloon-like lanterns would give a frenetic and active element to the design to help enhance that sense of movement. 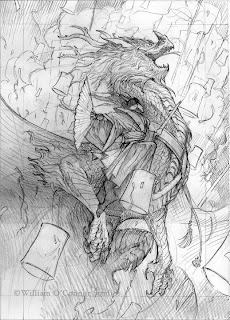 Whether I draw digitally or traditionally is decided from project to project. I have been returning to more traditional techniques over the past year, favoring traditional pencil work.
This graphite on ledger drawing is 11'x14"

After doing some research I realized that the floating lanterns of china are not round but rectangular. 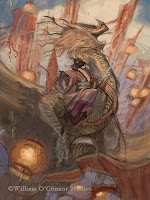 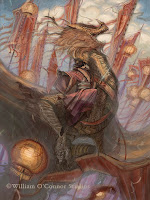 Right from the start of painting I realized that I didn't like the square lanterns. They did not give the sensation of floating and appeared like bricks, so I changed them back to my original concept sketch with round lanterns. Although the lanterns are tethered, their balloon shape look like jelly fish and the perception of lightness and floating reads better.

The painting progresses in this manner for several days until complete.