I entered this year resolved to not do any conventions, preferring instead to stay close to home and work. Well we all know how plans go, and it turns out I'll be doing at least three this year, and 2012 is shaping out to be pretty full! I love to see my old friends and meet fans, so I'm looking forward to an exciting convention season. I hope to see a lot of you at one of the following venues.

Have a Great Summer Everyone!, and I'll see you soon.

WOC
Posted by William O'Connor at 10:02 AM No comments: 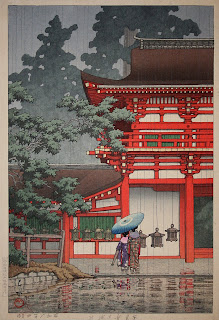 Being a traditionally trained American Art student, Asian Art never played an important part in my education. The Asian wing at the Met was merely a short cut to the Armor Room. I was familiar with Japanese art in as much as it influenced the Impressionists, and in my early work I illustrated extensively for AEG's Legend of the Five Rings.

In 2005 however, I was in Chicago and had the opportunity to see an exhibit of Japanese woodblock prints at the Art Institute. It was one of those formative experiences that you don't expect or look for, but changes the way you work for the rest of your life. Represented were Hiroshige, Hokusai and most importantly Hasui Kawase (1883-1957).

Directly influenced by his predecessors in the tradition of woodblock it was obvious that Hasui was also influenced by western modernism in his simplifying of forms, dramatic compositions and cinematic use of lighting. I was mezmorized by these alluring, beautiful and candid snapshots of an Asian landscape that straddled the 19th Century woodblock tradition and the 20th Century modernism. 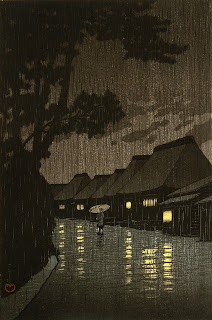 Today Hasui's influence continues as evidenced by contemporary artists like Hayao Miyazaki (1941-present). Every time I watch Ponyo or Totoro with my daughter I see his influence, and his images are some of the few prints I have hanging in my home. I am glad that my daughter is being exposed to this amazing artist long before I ever was.

To view an extensive gallery of Hasui's work, and acquire one for yourself visit: 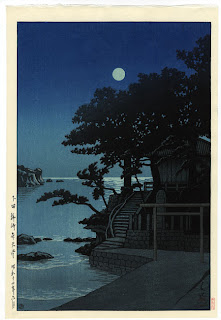 Posted by William O'Connor at 6:14 PM No comments: