Artist of the Month-John Sloan 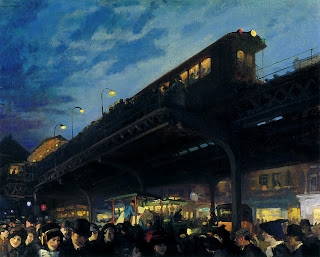 100 years ago was a tough time to be an American Artist. The 1913 Armory show had just blown the roof off of traditional art and the blinding light of new modern European stars like Picasso, Duchamp, and Matisse changed 20th C art forever. Academic painting was practically cast aside over night for the new avante garde movement. It would be over 30 years before America would lead the way in the art world and over 75 years before representational art returned to the main stream during the Post Modern Movement. 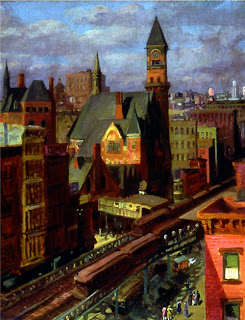 Into this depression era of art in America one of my favorite movements took place. The American Realism and Ashcan Schools. Artists like Hopper, Wood, Bellows and my favorite, John French Sloan (1871-1951).

Sloan's paintings are fantastic in many ways. Part illustration, part documentary, part sketchbooks of the life he saw around him every day in New York City. Reminiscent of Daumier and Rembrant's sketches they capture the grime and the dirt of the real world outside his apartment window. The faces in the crowds each unique, but indistinguishable, as when glimpsed on a crowded sidewalk or a bustling subway platform. Contrasted against these crowds he illustrates the extreme isolation that exists in the city. A world of towering spires and brick with thousands of windows looking over empty green-lit canyons, or clouds of laundry hanging from tenements. This was the real America, not the glossy, Madison Avenue depiction of America. 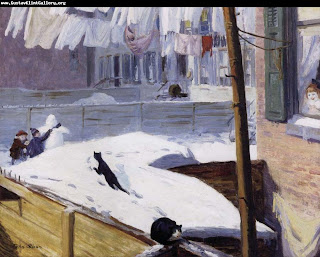 Looking beyond his ability to capture this unvarnished reality of life around him Sloan was a master composer. His designs are breathtaking, each framed as if looking out a window or through a doorway. Dramatic abstract designs that I believe influenced many future American painters like Hopper, DeKooning, Motherwell and Still.

Today Sloan, and his contemporaries, are held in higher regard than in the past, but still are overshadowed by the European pre-war modernists. Finding these artists can be challenging, usually displayed in smaller regional museums, but are well worth discovering. 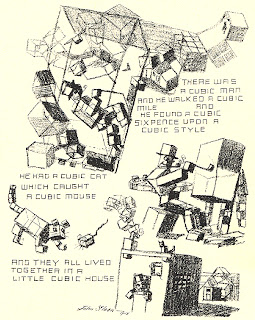 As a keen commentary on how the Victorian artists were lost in the 20th Century art world, Sloan did this parody of the Cubists in the 1913 Armory Show. Sloan participated in the show, but as illustrated by this cartoon, his comprehension of the future of art was far from contemporary, which is a shame because he had a very Modern sensibility.

Email ThisBlogThis!Share to TwitterShare to FacebookShare to Pinterest
Labels: Artist of the Month, Sloan, WOC