If there were a formula for being creative, we would all be Steve Jobs. The fact is that there is no formula for creativity. Creativity is the antithesis of formula. You can read all the books, and take all the Master Classes and workshops, but in the end despite learning all the anatomy and painting skills in the world there is no class that you can take, no book you can read, that can make you an artist.

Today was my set-up day at New York Comic Con. The Jacob Javits Center is this week the Mecca for Pop Culture. Games, Books, Movies, Comics, everything you can imagine, blitzed into your sensory receptors like a shot of heroin with 100,000 fellow junkies. As I set-up and got settled-in I walked around and was quickly over-come. After all, no human should be exposed to that much Hello-Kitty in one day. I love the fans, I love the artists, but for me its like Vegas. Its beautiful and flashy, but not Real, its all showmanship. I decided that if I were to survive the next four days, I had to center and focus myself. 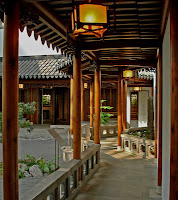 Escaping the venue I jumped into a taxi and headed for the Metropolitan Museum of Art. What was the opposite of massive pop-art over load?- The Japanese Wing! There I sat with my sketch book in Astor Court (left) and just decompressed preparing for the onslaught. I wandered through the rooms and was once again enchanted by the beautiful Scroll landscapes. I worked in my book and decided I would paint a large vertical landscape as my next piece.

Inspired by the idea of a landscape I worked my way to the American Wing intending to see some Beirdstadts and Hudson River Valley School artists for inspiration. I was informed that the wing was closed for renovation. With no other options I worked my way to 19th Century painting Wing, Hoping to see Corot and the other landscape masters of the Realist School. 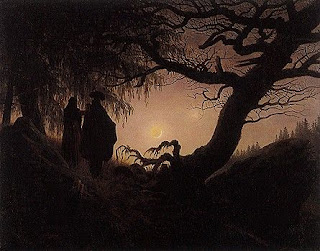 To my surprise I discovered that the 19th Century Wing had been completely rearranged. The new director has moved in many new paintings that I had never seen before. A David Caspar Fredrich landscape was exactly what I was looking for. A new gallery devoted entirely to the Orientalists was a surprise, and an Art-Nouveau Room reconstructed with a Mucha painting was entirely new to me. What a pleasant surprise! As I wandered back into the front Gallery, I saw a grizzled gentleman that looked very familiar. In a city of 8 million I don't expect to see anyone I know, but with the show in town I took a chance. I introduced myself, and it was in fact, Michael Kaluta! Another wonderful surprise. We chatted over the changes and additions to the gallery and hoped to see one another at the convention.

The moral of the story is that to be an artist one must venture off the beaten path. Do not put blinders on to only one thing, but venture outside of your comfort zone and explore. I have a new zest of ideas and new zeal for painting that did not exist yesterday. Go out and explore! Good hunting artists!!

I recently finished my Metropolitan inspired Japanese landscape painting. It was very well received at Illuxcon and sold to an old friend.

The painting "Race to Minas Tirith" was selected for inclusion into Spectrum 19.

Posted by William O'Connor at 7:16 PM No comments:

Just a note that I will be attending The New York Comic Con this year at the Javits Center. I will have a table in the Artist's Alley at Booth #W9!
We're expecting around 100,000 attendees so come early to chat, get an autographed copy of my book, or to see what I've been up to lately.

I hope to see a lot of fans out there this weekend!

WOC
Posted by William O'Connor at 1:21 PM No comments: