The Cursed Folk: Designing the Tiefling

Ten years ago in the spring of 2007 I was given the august responsibility of helping the creative team at Wizards of the Coast design many of the Races and Classes for Dungeons and Dragons 4th Edition.  This was a very exciting opportunity for an artist who had grown up with the art of Elmore and Parkinson hanging on his wall and had watched as Todd Lockwood had so masterfully designed the previous edition.

The other races such as the humans and the elves had all been well established and besides giving them a little stylistic tweaking there wasn’t much to do with them.   The dragonborn were a new and unique challenge which I’ve already discussed in my earlier blog War of the Dragonborn.  However I was presented with a new race for the core set that despite my decade of illustrating for D&D I had never heard of before.

The Tiefling were a race that had been only had slight mention in earlier editions and the artwork for the race was very minimal.  The most established depiction for the Tiefling was a small spot illustration in a 3rd edition monster manual.  The 4th edition design team wanted to make the Tiefling a core race but wanted to radically update their appearance to make them look more intimidating and “cool”.  The current depictions of the Tiefling did not inspire feelings of intimidation.  The drugstore little horns glued to the forehead and the thin cats tail made them look like humans at a con masquerade.  I knew that I wanted them to a be a distinctive race with unique anatomy and not a Star Trek Alien-of-the-Week or manga cartoon.

The horns and the tail were the defining elements of the race so my first direction was to make them as prominent as possible.  Part of the design of the 4th edition was to integrate the design into being a miniature game so part of the process was to make the character’s silhouettes easily recognizable from a distance. This consideration also had the challenge of limiting the height of any figure so horns that protruded upward were unwanted, but I felt they should still be distinctive.  I designed powerful horns that grew sweeping back from the skull and a tail that was not just a swishy, decorative monkey tail but a powerful dragon tail that was as substantial as a third leg.  The tail would be capable of an extra sweeping attack and would grant the Tiefling powerful bonuses to dexterity,  jumping, agility and discipline.  These bonuses would make the tiefling natural rogues and fighters.  With the horns as well I saw a fun opportunity to make them more than merely ornamental.  Designing the horns to grow as the character leveled up I thought was a fun chance to give the tiefling a unique ability to display their power.

In concept design it is understood that the process is a team effort and that dozens of people will be weighing in and chopping your ideas down into manageable pieces.  Knowing this I went in big with my initial ideas expecting them to be be turned down and needing to be modified.  To my surprise the design team liked them and we progressed with very little change to the initial concept, but from a mechanical view not many of my ideas were incorporated.

Once the physical traits of the race became established I needed to start to design their cultural aesthetic.  The dwarves were from the mountains, the elves from the woods, the humans from the plains, but where were the tiefling from? What was their history?  I struggled with this in reading the texts since most of the descriptions talked of them being a nomadic people with no home living in small isolated communities mostly in human cities.  I eventual cornered the creative director Stacy Longstreet  and asked her to tell me who the tielfing were in one sentence.  She thought for a moment and then said, “They are the cursed people.”  Its rare in art when a bell goes off in your head, but that really happened and a flood of images poured into my head.  They weren’t evil they were cursed.  A dark, lost, unwanted people wandering the world carrying their shame with them wherever they went.  I loved it.  My immediate touchstone was of course vampires, and I worked to give the tielfing that sexy, dark and gothic appeal despite their "deformity".  I carried this idea over into everything about them, their clothes and equipment.  I wanted everything to have a twisted aesthetic as if all of their prized heirlooms and weapons, all the relics of a lost past,  were also cursed and contorted into horrible but beautiful shapes, imagining that the forms of the weapons should reflect the shapes of their tails.  Elegant and deadly like the tielfing themselves. 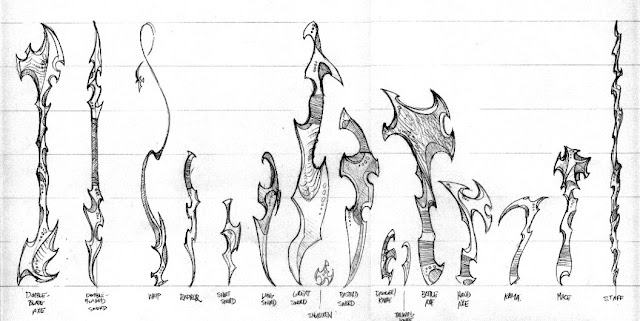 It has been a great pleasure to watch over the years a design that I’ve worked on be developed and evolve in the hands of many other artists and animators.  Below are some examples of never seen concept art I did ten years ago, Enjoy. 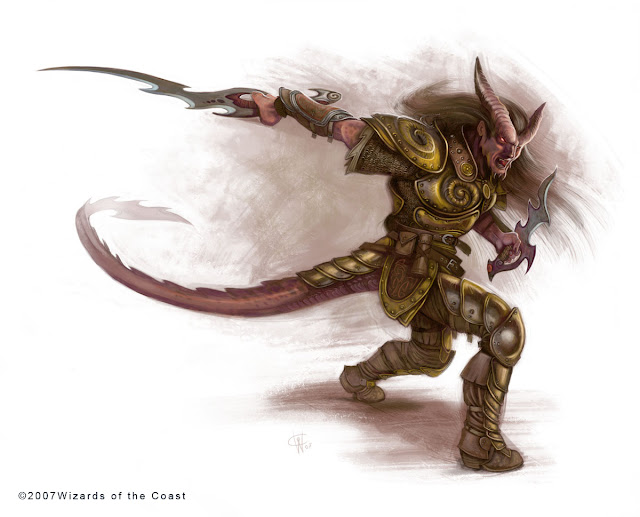 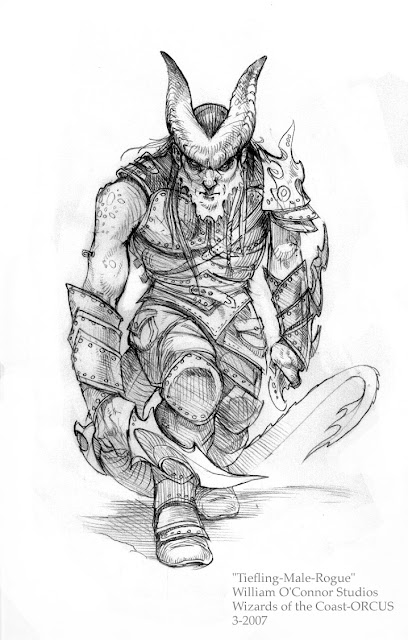 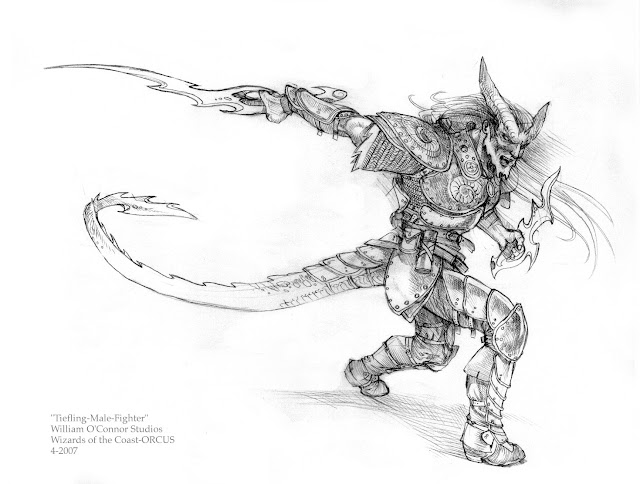 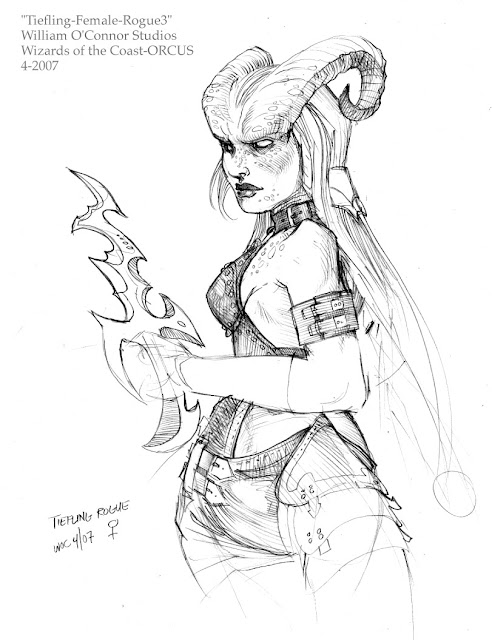 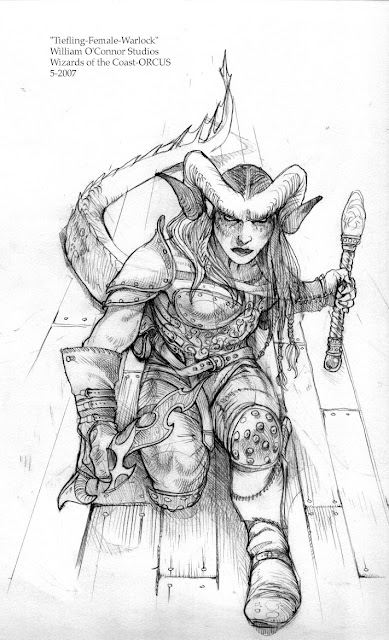 Posted by William O'Connor at 9:46 AM